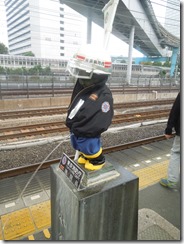 At the north end of Platform 2 of the Hamamatsucho Station on the Yamanote line there is a statue/fountain that may be the strangest I have seen since I got to Japan.  I actually have no business at this station and never would have seen it, except for that another gaijin that I met recently was telling me about it.  I still likely would not have sought it out, but on Saturday I was essentially wandering aimlessly, and when the conductor announced that we were approaching that station (please don’t ask me to type the name again) I decided to hop off and look for it before continuing on my way.

I am glad I was able to find it on my own, because it is quite small, and good as my communications via gesticulations may be I have trouble conceiving how I would have asked someone where this particular statue was.  If it was the Venus de Milo or the Statue of David I would be able to figure it out, but this one … I just have these terrible images of … never mind.

The statue/fountain is, as you can see, of a small boy.  Really it is no more that 75cm tall.  None of this makes this a weird statue.  The fact, however, that the boy is urinating into the pool (a practice I have always thought to be frowned upon) is only the first part of the weirdness of this statue… and if that was the beginning and the end of it I never would have gotten off the train.

Did you notice that the boy is dressed?  This is a weird state for a statue, whether or not the statue happens to be a fountain of a boy continuously urinating into the pool.

Now here’s where the weirdest part comes in.  There is, I am told, a group of volunteers whose task it is to dress this little boy.  Please take a minute to think about this: The statue firstly is quite sealed to the base; as well its weewee is… well, out and in use, I could imagine this causing several logistical issues.  According to my friend (and this is the weirdest part) the volunteers actually custom-sew the outfits, and then dress the little guy, without covering his weewee, and presumably without turning the fountain off.

I don’t know how often they change him, but my friend told me it is often enough.  More importantly, I would love to know how one applies to the position of Member of the Order of Dressing the Urinating Boy Statue… Are there auditions, tryouts, eliminations?  Who selects them?  Is there a compensation package?  Is it a full-time gig, are there term limits?  How long is a term?

So I saw the statue/fountain, and I went about my day.  I will be going back though… my friend told me that they change him every few days, and it is worth checking out the different outfits.  I won’t go out of my way, but if I am on that line passing that station, why not? 🙂

Have a great week…

2 thoughts on “The Urinating Boy, and the weirdest volunteers ever…”