It is almost ten years since I started blogging.  It is hard to believe that it has been that long, but there it is… A little over twelve years ago I registered my first domain and opened my own website, and I used that as a pulpit from which to to ‘speak’ to the masses.  I was thrilled when I got 20 hits in a week.

Although my blog has moved a few times (and has been renamed once) I have always said that I do not do it for the money… mostly because there has never been any.  I have never sold an ad, never accepted money to post an article.  Don’t get me wrong, the fact that I have a site with nearly 900 articles on-line does lend to my professional credibility, and I am sure that has brought me business over the years.  My reasons are not entirely altruistic.  Primarily so, but not entirely. 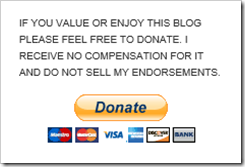 Sometime in 2014 I followed a friend’s advice and posted a ‘Donate’ button.  It took me a few minutes on PayPal figuring out how to even do it, but I did… and then I forgot about it.  Why?  Because nobody ever clicked it, but mostly because I have never blogged for the money, and was not going to start now.

It happened last week.  I got an e-mail from PayPal notifying me that someone had sent me $5.  I assumed it was a refund I was waiting for from eBay.  I went to see if I was right, and I was not… someone had found one of my articles very useful, and made a donation!  I was elated!

Of course, over the years I have received hundreds of thank-yous for different articles; people have left comments, I have had people buy me drinks, and dinners, and coffees, and once a small stuffed animal.  But after a decade this was the first time I had reaped financial gains from the blog.  Yes, it was only $5… but that is $5 more than the reader had to send.

I don’t want any of you to think that this is a whole ‘I have my hand out’ article… that is not the intent.  I was just happy about it… and happy is a good way to end a week.  Happy Friday!