The Dawn of a New Community

I had no idea when I was scheduled to come to Buenos Aires that I would be here to watch such a momentous event.  A month ago Elias Mereb, a fellow MVP from Venezuela, found out I was coming down and introduced me to Daniel Levi, a DPE at Microsoft Argentina.  Daniel told me that on the evening of November 8th Microsoft was hosting a ‘Virtualization Launch Event’, and if I wanted to come I was welcome.  He actually looked into getting a simultaneous translation service so that I could speak, but that did not work… which is good, because as I sit here at the back of the room I am a bit jetlagged and have slept 30 minutes since yesterday morning!

I should mention that my Spanish is horrible… but I understand a lot more than I can speak.  That is why as I sit at the back of the room listening to Daniel present, it is like déjà vu all over again.  It could easily be November, 2004 in Montreal, and Rick Claus speaking instead of Daniel.  Not only are we discussing virtualization – that first meeting 7 years ago Rick presented on Virtual Server – but he and Harp Girn also covered the importance of community, and asked us who was willing to participate.

On that fateful day Daniel Nerenberg and I raised our hands and stepped forward.  I would be hard pressed to come up with a more crucial junction in the formative years of my career as that moment.  Today it is Rodrigo de los Santos and Leandro Amore who are running the show as the inaugural presenter-volunteers, along with four others whom I had the opportunity to meet earlier.  I am so psyched to see this community – la Comunidad de Usarios de Tecnologias de Nube Privada (Public Cloud Technologies User Group) – coming to life.  I remember Steve and Fred from GUMSNET who were our spark, and I remember Thomas Kroll, Max Viel, Randy Knobloch, and a couple of others who were our initial leadership group.  MITPro started the same way as la Comunidad de Usarios de Tecnologias de Nube Privada is, just a few years earlier. 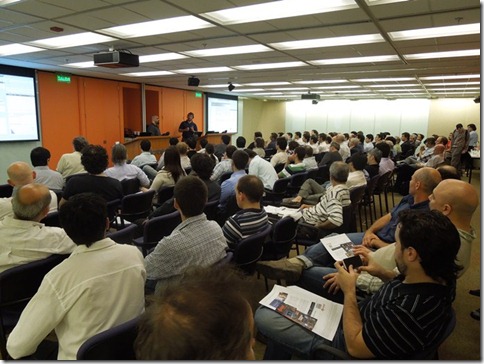 I tip my hat to these guys… and I will be honest, although I know that they are discussing heterogeneous virtualization host management in System Center Virtual Machine Manager, and can see the SCVMM screen on the overhead, I cannot understand a word that they are saying.  However the audience is enthralled… as a professional speaker I know what indifferent audiences look like and I know what captive audiences look like… these guys are captive, and the house is packed – two MPR rooms and hardly an empty seat, plus 10 people at the back of the room.  It is amazing to see.  This is a user group that has the potential to succeed, and as long as they have the right people at the helm (and they seem to!) then they will do great.

Interestingly enough, I met my first Microsoft MVP that night in 2004… tonight I had the opportunity to meet a fellow MVP who is a fellow member of the STEP Program – Roberto Di Lello.  We had spoken before, but we had never met.  It is great to see that just as they do in Toronto and Montreal and all of the other cities where I have visited, the local MVPs come out to support the user group community.  Thanks Roberto!

As Leandro and Rodrigo go on about the Cloud in Spanish I am ever tempted to raise my hand and ask the only question that I could easily ask in Spanish… ‘Que?’  Of course I would get a laugh, but I won’t do it.  I wouldn’t want them to do it to me!  However in complete seriousness, if you are in or around Argentina, you should reach out to Daniel and ask him about the IT Camp that he is planning for March, which will be the real Launch for this amazing group.  There will be a lot to learn, and I am just hoping that I will be able to come back to speak then.

While they will be serving pizza at the end of the meeting, what really impressed me is what they had set up at the beginning… six laptops encouraging attendees to sign up for the Microsoft Virtual Academy (See Free Online Training and Resources from Microsoft).  There were two lovely ladies helping explain what it was, and giving away swag for every registrant.  Yet another idea that I may just have to borrow!

4 responses to “The Dawn of a New Community”