I have written in the past about several different Windows to Go (WTG) key options, and have leaned heavily toward the ones with Military Grade Security (MilSec).  They are all good, they all do just about the same thing.  Of course, there are differences with deployment methodology, as well as the tools that support them, but in the end, you plug a key in, you boot from it, you have Windows.

Recently I was introduced to a key that sets itself apart, and it is obvious from the first glance.  Just open the box of the Aegis Secure Key 3z Flash Drive from Apricorn Inc., and the first thing you will notice is that its top is covered with a numeric keypad, along with three lights.  The polymer-coated wear-resistant onboard keypad allows you to unlock your device with a numeric passcode before using it.  Wow.  This really does change things! 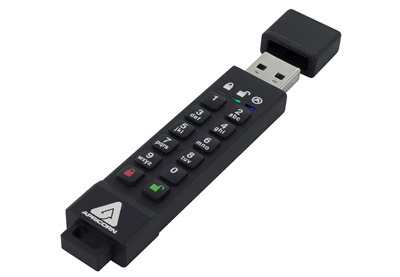 I had the opportunity to speak with Craig Christensen of Apricorn Inc. recently, and we discussed several of the features, as well as use cases, for the Aegis Secure Key 3z .  Some of the scenarios were obvious, but others really made a lot of sense.

It should be know that this key, available in sizes from 8GB to 128GB, was not designed special for Windows to Go.  In fact, according to Mr. Christensen, the vast majority of their users do not use WTG, and in fact the majority of customers who run a bootable operating system off the key are in fact using Linux.  Indeed, most of their customers are using the keys to store… well, data.

What sort of data?  Well, that would depend on the customer.  But with penetration into governments, military and defense contractors, aviation, banking, and many more, it is clear that the keys are in use by many serious people and companies for whom security breaches could mean more than a simple loss of competitive advantage.  Intellectual Property is certainly important to manufacturers, but when it comes to other sectors, the stakes get much higher indeed.

So let’s enumerate some of the unique benefits that these keys have over their competitors:

In short, this is a tough little device.

I decided to have a little bit of fun with the key this weekend.  The first thing I did was to create a WTG key.  Like my other WTG keys, I got the 64GB model, although they are available in much higher capacities.  So once Windows was installed, I was left with about 50GB of free space on the drive.  I have realized over time that unless I plan to use the key as my primary PC (I do not), that is more than plenty,  Yes, I will install Office 365 and Live Writer and SnagIt, as well as a dozen other applications I can’t live without, but I will still never need more than 35GB of that.  Possibilities…

Okay, Let’s shrink my Apricorn’s volume by 15GB.  It is now about a 45GB volume (formatted).  I then created another volume for my Data.  of course, I have both partitions Bitlocker encrypted, because Defense In Depth is important to me.  So now, the partition table on my key looks like this:

In short, I have my 350MB System volume, a 44GB Boot volume, and a 15GB data volume.  Why would I want that?  Remember when I said that the majority of customers use the Apricorn keys for data and not for Windows to Go?  Well, doing things this way, I can have the best of both worlds.  I can use the key to boot into my environment, but I can also use the 15GB MDG-Data  volume as a regular, highly encrypted and protected USB drive.

Of course, I had to test that theory.  I made sure I was able to take the key to another pre-booted installation of Windows, key in my code, plug the key in to that computer, enter my Bitlocker password, and use the key.  Yessir, it worked.  Woohoo!

At USD$159, the 64-GB key is competitively priced.  Unlike many competitive devices, the prices are cited right on the web page, and you can even buy direct without having to set up an account and speaking with a salesperson.  If you are a company looking for volume discounts, you can also buy them from distributors such as Softchoice, TechData, Canada Computers, and many more.  For a clearer picture of where to buy from in your region, visit their Where to Buy page.

I have been working with the Apricorn drive as my primary workspace today, and there are only two very minor drawbacks that I have found:

Whether you want it for Windows to Go, for data storage, or for a combination of both, the 256-bit AES XTS hardware-encrypted Aegis Secure Key 3z Flash Drive from Apricorn Inc. is certainly a must-have.  I know that going forward, this is a key that will always be in my pocket!