I will also state at this point that there are very few use cases for this functionality… but after 17 years blogging I have come to realize that there are no unique issues… only common ones and rare ones. If I had to do it, you might need to do it as well.

The problem is this: Once the Azure AD Connect is configured, it is not readily apparent how to un-configure it. Nor it is something that you can just install on a new server and take over. As I rebuilt my ADDS environment, I found myself unable to configure Azure AD Connect for my tenant, because my tenant already had it installed.

Shortly after my local environment died, I started getting the following e-mail… daily: 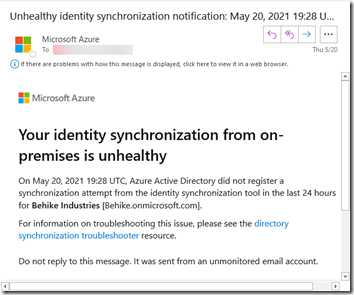 Well of course it is not synchronizing… the synchronizing server is gone. I logged into the Azure AD portal and saw it as unhealthy… but there was no way to unconfigure it. That is what I was going to need in order to start fresh.

I have mentioned myriad times that there are many things that can be configured with Windows PowerShell that cannot be done in the GUI. That is equally true with the Cloud – Azure as well as Microsoft 365 – as it is with Windows Server.

I have also mentioned more than a couple of times that PowerShell syntax is simple – it is plain English, with a Verb-Noun structure.

What I might not have mentioned is that there are two of those verbs that so often work closely together. Get- and Set-, where the former gets you configuration information, and the latter lets you set those settings.

I was able to find that the cmdlets that configure the AD Connect settings all have the words DirSync in them. That was all the clue that I really needed. With that clue, here are the steps that I took to solve the problem:

For each of these cmdlets, I was asked to authenticate. I entered the credentials of my Global Administrator account.

This listed all of my DirSync cmdlets… and there are only seven of them (four Get-, three Set-)

Okay, that was promising. If you can enable Azure AD Connect with the switch –EnableDirSync $true, could it really be as simple as that to disable it? Let’s try it out:

I went back to my Azure AD portal to look…

On my newly created server I downloaded Azure AD Connect… not as easy as one might think, as Windows Server only comes with Internet Explorer 11, a browser not supported by the Azure portal. I had to click on this link to download it

Of course, once you do that, you can start right back where we began… and read this article to do that!