It is good to get away during the winter.  This past January my beautiful wife Theresa and I got onto a plane with our younger son heading to Florida.  Theresa and I were taking a cruise, but we planned for a few extra days in Florida with my parents.  I brought my golf clubs just in case the weather was nice enough… and it was!

My father has been golfing since before I was born, and despite getting older, he still enjoys the game.  I was really hoping that he would be able to play a round with me, which we hadn’t really done in years.

Monday morning we headed to the Hollywood Beach Golf and Country Club.  It was a cloudy day, but we were still able to golf in shorts.  We were paired up with a couple of lawyers who decided to play hooky that day… it is always annoying when people in your foursome are attached to their cellphones during the game, but I understand that not everyone was on vacation.

Dad doesn’t hit the ball nearly as far as he used to, but he still hits a good ball.  For a man of his age to be playing eighteen holes as well as he did is impressive… he beat me by a couple of strokes, but in truth I am not a very good golfer, and had not played in eighteen months.

I don’t know when I had a better time golfing… Dad had some good pointers for me, I hit a few good balls, but most importantly I got to spend a relaxing and enjoyable day with my father.  He is great company when the stresses of life are a few holes ahead or behind us!  Thanks for the game A.G… I hope we can do it again soon! -M 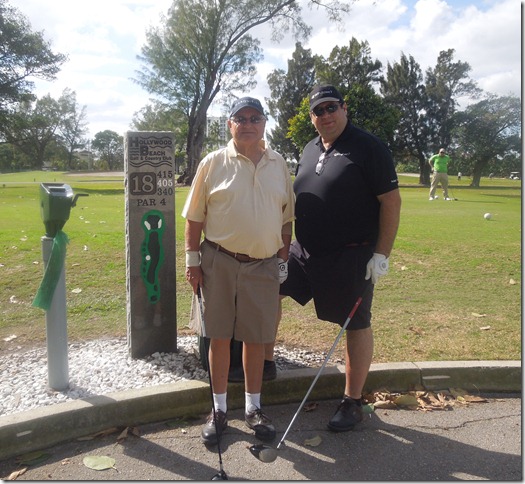