Thank you readers and Happy Halloween!!

The calendar has turned in Tokyo.  Although there are a few hours left in North America, here it is now Friday, and more importantly it is November.  I got in late from a Halloween party in Shibuya… the whole city was a crazy place tonight, and I have the pictures to prove it (they come later in the post).

In the meantime, despite there being several hours left on the East Coast, October (2013) has been guaranteed the top month ever for The World According to Mitch.  I hope it is a combination of on-point technical articles, and my life experience (currently in Japan) that has drawn so many of you here, and so many of you keep coming back.  Thank you! 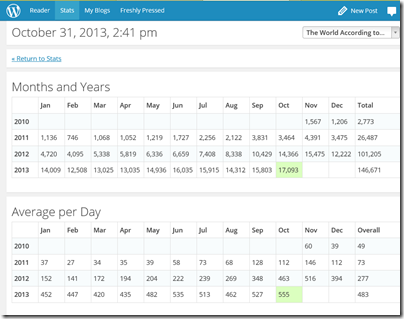 As always I want to hear from you… tell me what you want to see more of, what you like and don’t like.  I read all of your comments, and try to adjust as I can.  In the meantime I promised some of you more wild Tokyo Halloween costumes, so here they are!

I thought these were some of the wildest costumes I’d seen… as were most people they were only too happy to pose with me,  However the costumes get even more interesting when you look close… I am not a pervert, and would never take and post dirty pictures, but this next photo of one of the girls sitting down underscored the detail put into the costume… namely, their skivvies are also lighting up and flashing!  The people I was with couldn’t help but wonder how well insulated the costumes were, because moisture and electrical charges are a bad mix… Talk about fiery sex!  (Also when they turned their costumes off you could see that their undergarments had been coordinated as well as the rest of their costumes…)

I thought this next costume was quite clever, and proves that I am not only taking pictures of sexy girls in scantily clad costumes.  I also got to take a picture of two gentlemen wearing naked women’s bodies 😉

This gentleman was at the bar where I spent the evening, but by coincidence is also from Toronto!  He’s spending some time in Japan just like I am, but wasn’t careful because with all of the zombies out it looks like one of them tried to eat his brains!

I am not sure what these girls are dressed as, but don’t they look so cute?  (Notice the McDonald’s Golden Arches in the background…)

I told you they coordinate their costumes, right>

I wonder if he can predict going home alone tonight? 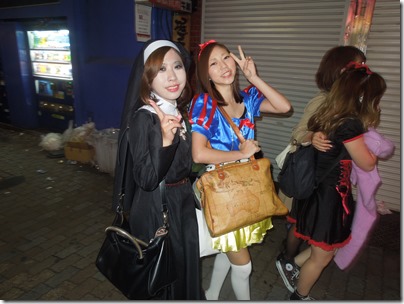 Anyone care for some of these guys grilled up with some balsamic vinegar? 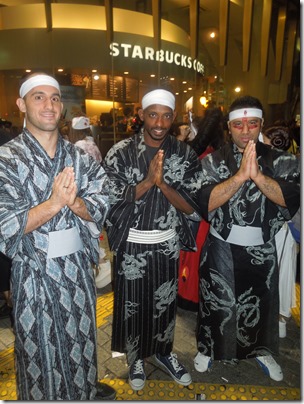 All in all it was a crazy night.  You wouldn’t think that dressed as I was (golf shirt and my leather jacket) that I would win a costume contest, would you?  Alas, I did… until it was proven that I cheated.  When I entered I told them that my name was Mariko, and that i was a 22 year old short Japanese girl in full makeup.  When I was announced as the winner the girls in the Red Army/Stewardess costumes (see the photo in front of Cafe Miyama) Attacked me and stripped me naked trying to prove I wasn’t who I said I was.  The trophy was taken away from me, but I think I still came out ahead!

Happy Halloween, Happy November, and thanks again for reading!