A lot of people asked me how I could bear to part with my dogs when I moved out of my house.  Well I do have shared custody of them, and I am allowed to take them when I want.  In truth my lifestyle now is not conducive to having dogs – I work from 9-5 and teach Taekwondo from 6-9 four nights per week.  However there are going to be times when I do get them… and this is such a week-end.

Actually to be fair I only got Jacob, because I did not think it would be fair to them (or to me) to have both 40lbs dogs in the condo at the same time.  Theresa took the kids to Ohio for the week-end, and I asked if she would take Gingit with them.  The kids were thrilled about it, and Jacob came with me. 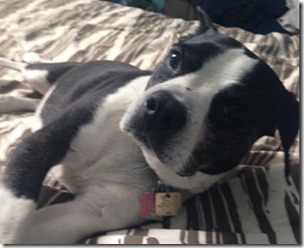 This was Jacob’s first visit to the condo, and I wasn’t sure how it would go.  I took him for a little walk before coming back here, and I hoped that would settle him down.  No such luck… we got here, and he wanted to go for another walk.  ‘Dad, I have to check out this new neighbourhood!’  Okay… in truth I had not explored at all yet, and we found a great walking path not far from here.  Along the path we found a baseball diamond (actually we found several, but one had a game going on).  We sat in the stands and watched a couple of innings before continuing on.  When the game was over we continued on our walk, and I figured that after 3 miles he would be satisfied.

We took a nap together on the couch… the TV was on for a bit but I was knackered and Jacob was happy snuggling up to my legs.  I had plans for Saturday night so I set the alarm, and he didn’t move until it went off… at which point he was hungry (it was meal time).  I fed him, and then took him outside to do his business.  When we came back in (he was all business this time, and made a bee-line back to the condo) I grabbed my stuff and headed out… and hoped for the best.

You see, the proof would not be how well behaved Jacob was when I was home, it would be how would he be when I was gone… for nearly five hours.  I didn’t have a choice, and besides… how much could he really destroy?  A silly question, knowing Gingit as well as I do 🙂 (See article).

When i walked in at around 12:45 I was greeted by a dog who it seemed had been crossing his legs for a while… no accidents, but he really was eager to go out.  No problem, we went downstairs for a quick turn, more business, then right back. As I write this he is stretched out on the couch… and for the record there was absolutely no damage done.

I love my Jacob Puppy and while I do not regret leaving them both for the kids, it really is nice to spend some time with him… and I can tell he feels the same way 🙂