I love Taekwondo.  I took it up seven years ago as an activity I could share with my son, but he never took to it the way I did.  Okay, we still do other things together… and I am now Instructor Garvis to the myriad Taekwondo students at OMAC.

Taekwondo was not my first martial art.  In fact, my first exposure to the martial arts was as a kid when my parents enrolled me in Karate at the YMHA in Montreal, under the tutelage of Sensei Yaki Mendel.  I think I earned my Yellow Belt before quitting (something I was very good at as a kid and right through high school).  In my late teens my girlfriend at the time (Beverley) and I signed up for Shotokan Karate, which we both enjoyed… for about six classes.  That was it.  Soon thereafter my friend Johnny Mo, who claimed to be a Kung Fu sifu, taught me and a couple others a few Kung Fu lessons at a gym, and some of what he taught us actually stuck. 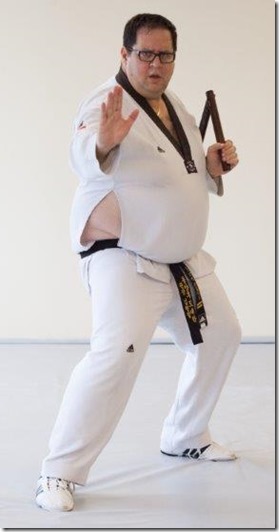 It was not until the army that I really got involved in Martial Arts.  I took to Krav Maga like a fish to water, and loved every minute of it.  Thank G-d, because over the years I have used what I learned to get out of a couple of less than favourable situations.

Around the same time as I started learning KM, I was in the Central Bus Station in Haifa where I found a store that sold nunchaku.  By my math that would have been around twenty-one years ago.  The first time I was there I bought a pair of foam nunchaku, thinking back on the Bruce Lee and Ninja movies I had seen where I was always fascinated by them.  I started to teach myself how to use them, and I fell in love with them.

My proficiency and understanding of the weapon started there, but it was when I was posted to a shithole of a base near the Gaza Strip when I met someone who instructed me in them… the right way, from the beginning.

I should mention off the bat that I hated the foam nunchaku.  Right from the beginning I loathed them – they bounced off your hand and oh, by the way, in order to keep their shape they are actually soft foam around a hard PVC tube… and those tubes are going to break the first time you hit anything with them.  So the next time I was in Haifa I picked up a pair of wooden nunchaku, and I have not looked back.  They are easier to catch, they don’t break when you use them… how can you go wrong?

You want to know how you can go wrong?  Easy… You have two pieces of reasonably heavy wood attached to each other by a rope or a chain that you are whirling around at extremely high speeds, around your body, arms, back, neck… you change hands with them at an alarmingly fast pace, and the only thing that you can use to control the piece that is not in your hand at any given second is a keen understanding of the momentum involved.  What am I saying in plain English?  Moreso than any other weapon that I know of, it is extremely easy to get hurt while using nunchaku… even for people who are extremely good with them. 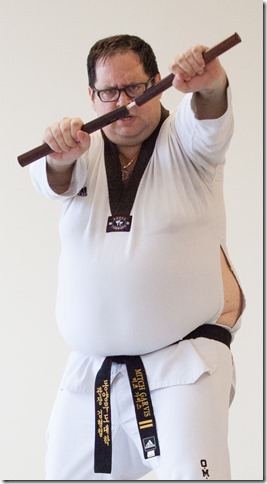 The story I like to tell is of a beautiful day on the beach of Netanya.  I spent six months living with a family in the suburb of Ramat Poleg, and it was a short walk to the beach.  That was where I went to practice, and I would spend hours doing it… walking along the dunes, doing my best to go faster and faster, until I thought I could do it with my eyes closed.  It was on this beach among these dunes that I remember one day waking up… but I had no recollection of going to sleep, or even sitting down.  All I can tell you is that I had a giant Flintstones lump on my head, I had a splitting headache, and my nunchaku were lying a couple of feet away from me.  It did not take a rocket scientist to figure out what happened.

While they are not strictly speaking a Taekwondo weapon, we do nonetheless teach nunchaku at Master Kim’s OMAC.  Some of the kids love it, others… well, less so.  But that is fine, they are optional (as are all weapons classes until 2nd Dan).  Instructor Peter Wolchak does a brilliant job teaching the students – even though he prefers the Bo Staff 🙂  It should be noted that everyone – including Instructor Peter – uses foam nunchaku for the class.  it is a matter of safety.

Recently I was working on my own choreography – there was nobody around so I was using my proper wood nunchaku.  I don’t know exactly what happened, but I missed a catch, and the wood hit my side and left a proper welt.  It was a good reminder to always respect the weapon – and the minute you think you can do it without paying attention is the minute you get hurt.

Let me rephrase that.  If you practice with nunchaku, especially wooden ones, you will eventually get hurt… possibly badly.  Nunchaku are a very serious weapon – not a toy – and by the way, they are illegal in Canada as well as several U.S. states so don’t think that this is ever going to be the weapon you carry for protection.

I have no plans to put my nunchaku down… ever.  Welts, bumps, bruises, and all, I love the weapon, and if I do say so myself I am pretty good with them (after 22 years I should hope so)!

I have a few different pair, each one for a different purpose.  A keen and knowing observer may notice the pair in these pictures is very different from most common pair – for one thing, they are octagonal – I just like the feel better.  They are connected by string instead of the more common chain – I like the feel better, not to mention they are much quieter.  This pair is also unique in that the two sides are connected by a much shorter rope than usual – 1” rather than the more common 4”.  In truth I bought them by accident a few years ago and couldn’t be bothered to return them, and it is only recently that I have spent a lot of time getting used to the differences between the weapons – while the size, shape, and length of the wood may alter the feel of the nunchaku (octagonal as opposed to round, 12” are my preference) the shortened distance between the sides changes everything about the weapon – how it flies, how it reacts.  It is not better or worse… just different.

I have gone through several pair of nunchaku over the years – a score or more in all likelihood.  While I have ordered for myself a new pair to try out, I think I have found the combination that I am most comfortable with… for now.  Will that change?  We’ll see… but in the meantime 12” (with the 4” rope) octagons are what I favour… and if you want to come watch, I just might choreograph something special for my next Belt Test! 🙂

One response to “Slinging Chucks”