Let me start by saying that I had the greatest time at the Toronto 2015 Pan Am Games.  It was a pleasure to spend eight days (plus training) with a group of mostly like-minded individuals who, when they were asked, signed up by the tens of thousands to volunteer at the Games… in any capacity asked.

That being said, I admit that I applied specifically to volunteer for the Taekwondo competition.  It is the art that I have learned, practiced, and taught for nearly eight years, and I will likely continue throughout my life.  Had the Organizing Committee seen appropriate to offer me a spot at another venue, or for another sport, I would have availed myself of the opportunity to decline when I received the offer in January.  I took a lot of time off of work (unpaid) to work the games, but my interest was specific.  Fortunately for me it worked out. 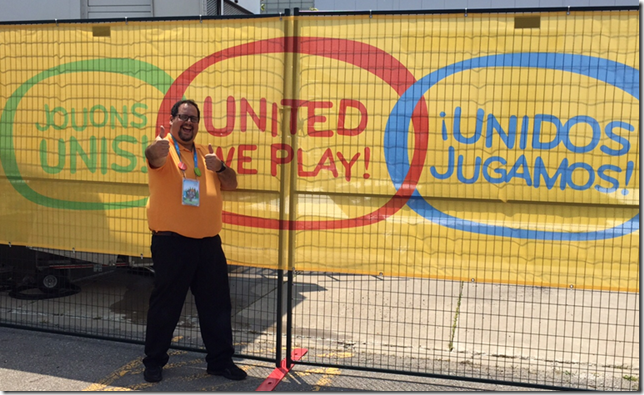 I received several things along the way – a uniform and a shoulder bag, tickets to the dress rehearsal for the opening ceremonies, and a gift certificate to Joe Fresh.  I received a couple of pins, a pair of cheap sunglasses, a keychain, and a Pachi doll.  After my last shift I was handed a generic certificate thanking me for volunteering.  While these were all nice, the value of all of them combined does not come close to the wages I did not earn on any of those days… not by a long shot.

[vol-uh n-teer] /ˌvɒl ənˈtɪər/
noun
1. a person who voluntarily offers himself or herself for a service or undertaking.
2. a person who performs a service willingly and without pay.

I looked up the word to be sure because some (not most, but a vocal some) are expressing sour grapes about several of the things we received. They wanted something in exchange for their service.  Some of them were upset by the quality of the shirts, the scarcity of the pins and key chains (whaddya mean we all only get JUST ONE?) and, on the last day, the participation letter that we all received.  ‘It’s too cheap, it’s not personalized, and anyone can Photoshop it to make it look like they volunteered too!’

I think the first time I volunteered it was to collect signatures to have Anatoly Sharansky released from a Soviet prison.  I don’t know how old I was the first time I did so, but as he was freed several years later (when I was 14 years old) we can assume I was 10 or 11.  It never would have occurred to me that I should receive compensation for my work… but when Sharansky moved to Israel in 1986, I beamed with pride.

That was 30 years ago; can someone else claim that they did what I did?  Sure, it’s easy.  Does that mean they did it?  Of course not.  In the same fashion, anyone can mock up a letter that says they volunteered at the Toronto 2015 Games… but they don’t have the memories, the experiences, and the new friends to back it up.

‘But that doesn’t change the fact that someone could put it on their resume and tell prospective employers that they volunteered!’

Firstly it doesn’t take a lot to do that… 99 times out of 100 an interviewer is not going to say ‘Hey, you claim you volunteered… can I see the certificate to prove it?’  But they might ask you to talk about the experience and what you learned from it… who knows?

I was in a bar several years ago with some friends, and there was someone telling people that he served in the Israeli Defense Forces.  He was trying to impress women, and from what I could tell he was about to succeed.  I went up and started asking him a couple of questions.  Nothing like ‘Where did you serve?’ or ‘Did you see action?’… I asked him what his Mispar-Ishi was… I didn’t explain to him that it was his Army Serial Number, because if he served he would have known… no matter how bad his Hebrew was.  It took about 30 seconds to expose him as a fraud, and 30 more seconds for him to understand that one day he was going to claim to be something he wasn’t… no, there was no violence involved, but I put the fear of G-d into him.  For those wondering, he left the bar alone that night… and quickly.

In the same vein, you can claim to have volunteered… but it wouldn’t take more than a few questions to either prove you were a fraud, or at least put enough doubt into the interviewer’s mind that you won’t get the job.  Unless you are Mike from the show Suits you are not going to fool anyone for long.

What did I get out of the games?  Believe me, I have memories that will last a lifetime, and while there are some pictures, there is no piece of paper that matters compared with the memories.  I also have the swag, some of which is cool and most of it is not.  But the parts that matter… nobody can take that away from me… and nobody can fake it.

So what’s my point?  If you volunteered and had a bad experience (there were 23,000 of us, and I have heard some stories) then I am sorry to hear it.  I’ll bet we all are.  If a venue lost track of you and you showed up for a shift and were turned away because there was no record of you, well that sucks.  If you are disappointed that security guards hounded you for free pins, well that is pretty crappy.  If you didn’t get the right size uniform or there were too many volunteers so your credentials were cancelled, I really do feel for you.  But overall, the games were an overwhelming success; Toronto 2015 was a well-oiled machine and the nightmares that everyone anticipated did not actually happen.  There were no empty venues, there were no gridlock-apocalypse, and aside from one Brazilian water-polo player who is wanted by the Police here and four Cubans who decided to defect, the athletes thought the games were amazing.  Hopefully, most of the volunteers did too.

Thank you Toronto, and on behalf of the volunteers, in light of the few loud bad apples, I apologize..