I must be mellowing as I get older.

When I got my Surface Pro (was it really only February of 2013 that they came out?) I was still working with Microsoft, and a colleague at the Microsoft Store in Toronto (back then there was only the one) arranged for me to get in early so that I could open the first device sold in Canada, and of course I recorded it.

When I upgraded to the Surface Pro 2 a year later (February 13, 2014) I was heading out of town from Ttve igioronto to to Quebec; there was no way I would get all the way to Chateau Frontenac with the new device in the car, so I stopped off for lunch and recorded my unboxing video at a rest area off Highway 401.  That video did not turn out well, but it was recorded.

It was only five months later (July 3, 2014) that I traded in the Pro 2 for my first Surface Pro 3… This would be the first Surface that would be my primary PC.  My family was out of town (visiting Grandma for the Fourth of July no doubt) so I was able to rush right home, set up my video camera and tripod, and record the unboxing video from my dining room table.  While I would go through a slew of them (there were several flaws in the original Surface Pro 3 so I had to return it a few times to get a good one) it (and they) would be my primary PC for over a year.  I say they because when I went back to work for Rakuten in January, 2015 they provided me a corporate laptop which was also a Surface Pro 3.  Once they got it right, they were pretty rugged machines.  Unfortunately shortly before my recent trip to Japan I well and truly Claused the device, when my Rakuten Surface was knocked out of my hands and made its way to the bottom of Lake Ontario.  We will give the device a pass though… that was slightly abnormal use, and it was the one thing that I found could not be recovered from.

And then, on December 9, 2015, nearly a year and a half after the Surface Pro 3 came into my life, I traded up again.  I picked up my Surface Pro 4 (this time with an Intel Core i7 CPU and 256 GB of storage) from the Microsoft Store.  However rather than running home to open it, I called my girlfriend and went over to spend some time with her.  The conversation did not revolve around how excited I was to have my new device; in fact it didn’t revolve around computers at all.  We had a nice evening, and after a few hours I took my leave. 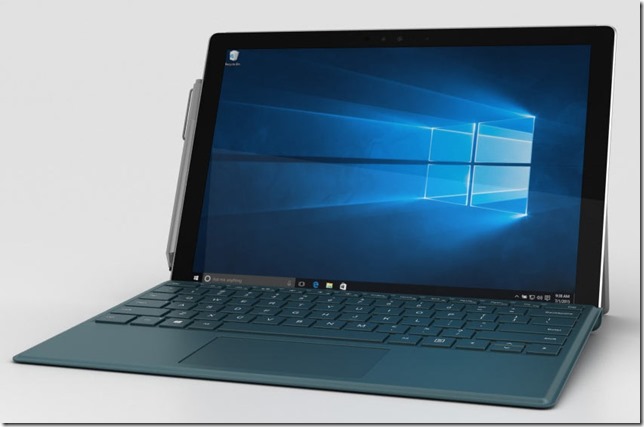 …and THEN I went home to record the unboxing video!

I have now recorded five unboxing videos (two were not good enough quality to share).  I don’t think I did too bad this time, but you can be the judge.

While recording the video I had the two devices side by each, and was able to make a couple of comparisons between the 3 and the 4.  However it was only after I shut off the camera that I started to see some of the great differences.  On camera I mention that the keyboard magnet seems to be stronger than the old one; I had forgotten that the stylus now connects to the side of the device magnetically as well, and my first impression is that the magnet there is quite strong as well.  I never used the magnetic corner of the SP3 because I did not want to have to replace my lost stylus; I am not at all worried that this one will be lost… although time will tell.

I was disappointed that my Juiced Systems 4-in-1 adapter does not fit while the power supply is connected.  While I was not prepared for that, I consider it a minor nuisance, especially because of the better battery life we have been promised.  I already knew that my new device would not fit into my old docking station – I have to decide now whether to pick up a new dock, or just order the compatibility shim that Microsoft has created.  We’ll see.

Isn’t that one of the bigger issues we have when we replace laptops and tablets… we have to start our collection of toys from scratch?  Fortunately this is not entirely the case with this device.  The leather folio folder that I picked up last year for the Pro 3 fits my Pro 4 perfectly… That was a relief, as I really like the folder.  I am also thrilled that I don’t have to throw out my extra chargers – those are the same too, a relief knowing what I paid for them.

I spent an hour installing software before heading off to bed.  No, I have not tried the new high-res camera logon yet but I will, don’t worry.  I have written this article on the Pro 4 on the train into the office, and I cannot say enough about the improved keyboard design.  It is a much easier typing experience.  I know there is also a keyboard with a fingerprint reader, but one thing at a time.

No real complaints yet, although I am sure there will be a pet peeve or two.  Stay tuned to find out what.  In my next article, find out why I opted for the Surface Pro 4 over the Surface Book!