When Emily from ChargeTech reached out to me recently and asked me to blog about the new ChargeTech Plug she sent me a video that their CEO had recorded.  It talks about the ability to work from on the go and to power any device from anywhere, eliminating the need to sit on the floor at the airport to be near the power outlet.  I watched the video, seeing people work from the beach and from other places I would love to work.  It shows a picture of Emily camping, and people sitting on the beach watching a large screen TV.

So yes, the video does demonstrate that the new device (ChargeTech Plug will retail for $199 for the base model), with 48,000 mAh, is their most powerful PPO (Portable Power Outlet) yet.  I get it.  It shows that it has two 3-prong outlets (the ChargeTech Portable Power Outlet that I discussed here only had one outlet, and boasted a still-impressive 27,000 mAh).  It even shows someone (for reasons I cannot fathom) who brought their computer AND printer to the beach.  It’s the sand in the printer part that scares me… and I still wonder who needs a printer that bad.

However in my opinion, and what I wrote back to Emily, is that the video falls short of demonstrating the truly revolutionary feature of this project, the optional solar panels that will continuously recharge the Plug out in the bush, on the beach, and wherever you may be.  How incredible is that? 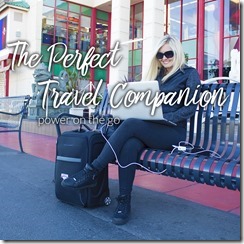 So with that in mind, I told Emily that I wanted to get one of these for my next Cuba trip, for a couple of reasons:

Here is what I have in mind:

Now let’s face it… What I just described is exactly what will happen when I get to Cuba because, frankly, it is exactly what happened the last time Eduardo and I were in Cuba.  But how cool is it that we can do all of this… without ever plugging a device in to a local power outlet?

I’ve spent a lot of time reading about the ChargeTech Plug, and I am impressed.  With 250 Watts you can power just about any two devices short of your washing machine and dryer (remember that most airplane seat plugs will not charge a laptop if the charger is over 65W).  Its 48,000 mAh capacity is incredible, but even moreso that unlike the original PPO you can do Pass-Through Charging… in other words, power your device even when charging it.

The Tesla battery cells are truly industry-leading, and with the ability to recharge either by plugging in or with solar panels you can truly plan to live off the grid indefinitely.  Don’t get me wrong, I have no plans to leave the grid for any extended periods of time, but if I ever wanted to I could

The company is launching a crowd-funding campaign on Indiegogo, which means you can get in on the very ground floor.  That page is at https://www.indiegogo.com/project/preview/24f0c4e7#/.  If you want to help them to get the buzz going, click here and get the conversation started.  And if you want to join me for my week in Cuba, feel free to e-mail me for details