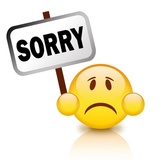 Last week Jews around the world fasted for Yom Kippur. The translation is Day of Atonement. In the days leading up to Yom Kippur we are meant to seek forgiveness from others for our transgressions against those we might have wronged. The thinking is that while G-d can forgive sins against him, it is only the people we have wronged who can forgive those wrongs. I have had a lot to seek forgiveness for over my life, and some of those wrongs will never be forgiven.

I do try to be a good person, and as such, when someone seeks my forgiveness, I try to forgive when I can. And so when, a couple of months ago, someone whose name may start with Q asked me to forgive him, I did. I did not let him off the hook easily, but I did say that I would give him a chance. He told me he did not know what had come over him, that even when others spoke against me he had told them that I was a good guy, that I had been good to him, and it must have been that he had been drinking. Still he had cut me off completely. When he asked forgiveness I was willing to accept his remorse.

Early this week something happened, and Q confronted me. I had not done anything, but it looked like I had. Even if I had done what I had been accused of, I still would not have harmed anyone… but someone who does not like me (and, again, someone who had been a false friend) used it as ammunition to talk bad about me.

Q decided he needed to get me to confess to him. I told him I hadn’t done anything, but he did not believe me – he would not believe me – and he spent a couple of hours yelling at me, threatening me, and in the end told me that he would take every chance possible to besmirch my name, both on-line and in person… not because I had done something wrong, but because I would not confess – even in confidence – to him. This, of course, was less than two months after he apologized for showing me he could not be trusted.

The next day, having let a few hours pass, I asked him why he had taken it so personal. His answer?

I was drunk to be honest I don’t know why I took it so personally….. I thought I was just chatting with you a bit.

And believe me or not, while I did unfriend you I never talked smack. You can ask <named two friends> or whoever.
I just thought it was ridiculous you were denying it to me but whatever.
It wasn’t like I was investigating for <edited out>, every one already knew it was you, I was just sending a message cuz j thought it was funny.

So if we read his words, he had no excuse for taking things so personally, but he was drunk. That is perfectly plausible – the initial conversation started after 9:00pm and with some breaks lasted over two hours. But this second conversation, in which he went on to again tell me he thought I was lying, took place at 3:00pm the next day. Is it possible he was drunk then too? Yes. Is it likely? Probably not – I believe he has a job, and was probably either at or just finished work.

Hope I do see you soon, I’ll make a fucking point of coming to <A mutual friend’s house> next time your there….. not threatening anything, just want to put you on blast in front of other people

I don’t know if it was or it was not… but I will say this: In the same statement where he claimed to have been drunk the night before, he did not apologize for his behaviour, and he continued to call me a liar. Of course, he did not threaten to disrespect a mutual friend’s house by going there to make a scene, and he did not threaten to expose me and what a terrible person I was to everyone who would listen… so at least he was a bit calmer.

He was still the same person.

Q’s personality did not change when he was drunk, it was just enhanced. I have heard that so many times, but I don’t think I ever believed it… until now. People have been telling me for years that certain things – alcohol, drugs, old age – do not change who you are, it just magnifies some of the traits that are in you. Maybe that is why I have never started a fight when I was drunk. It is not who I am sober, so why should it be so when I am drunk?

Now… have I ever said things that really pissed someone off when I was drunk? Absolutely. THAT is a magnification of some of the traits I have worked over the past few years to fix in myself. Am I loud when I am drunk? I know that I am… and these are just a couple of the reasons I seldom drink to intoxication. It is also why I know I can trust someone sober, when they are a trustworthy drunk.

Have a great weekend everyone.