In mid-September, the recruiting department of my company introduced me to the man who would become my manager at my new client.  He told me he reviewed my CV, and did not see Microsoft Office 365 listed on it.  I told him honestly that while I have worked with the technologies before, I never felt it was one of my areas of expertise.  With that said, if he accepted me for the position we were discussing, I would focus and make sure I got the relevant certifications.

At the time, I did not know exactly what was meant by Microsoft 365, so when I started the new role, I was in for a bit of a surprise.  It seems that the Office 365 certs that I would be pursuing were actually Microsoft 365 certs, and that Microsoft 365 comprised both the modern desktop – Windows 10, which would extend to include a good knowledge of both operating system and application deployment technologies (so I would get to dust off my knowledge of System Center Configuration Manager and Microsoft Deployment Toolkit), management technologies (Config Manager and Intune), and the cloud side of the house, including all of the server components of Microsoft Office (Exchange Server, SharePoint Server, OneDrive for Business), Azure Active Directory, Azure Advanced Threat Protection, and a bunch of others facets used to implement and manage a modern (and secure) desktop and application infrastructure.

I should mention that there was a time that I was really involved with Microsoft Learning, and I knew practically everything there was to know about the certification program… at least, for the infrastructure side of the house.  I was never too involved in the dev side of things.  I fell out of that habit when I ceased being a MCT Regional Lead, back in the fall of 2013.  That may not sound like a long time, but in dog years it is 42 years, and in IT years it is nearly an eternity.  I found out that nearly everything was different… and that is not a bad thing.

Back in the spring, I took my first Microsoft Azure exam, the Azure Fundamentals exam AZ-900.  I wrote about that experience in this article.  When I went to look at the Microsoft 365 certification path, I discovered that there was a similar exam, MS-900: Microsoft 365 Fundamentals.  While it was an optional exam as far as my certification path went, I decided it would be a good way to get my feet wet.  I spent a few hours studying for a couple of days, and then I passed it.  As with the AZ-900 exam, I finished it extremely quickly.

Energized by my initial success, I decided to go back home and hit the books… and with my manager’s encouragement, I worked feverishly to pass the next four exams, which included:

MD-100: Windows 10.  This one was also theoretically optional for me, as I had already passed both 70-697 and 70-698.  However I did not want to take any shortcuts, and I know it had been nearly two years since I sat those exams.

MD-101: Managing Modern Desktops. This would be a little more challenging, as it would require knowledge of many of the on-line tools that I might have used and managed, but was not fluent in.

While things have changed a lot since then (apparently you now get a new logo for every exam that you pass), I see that Microsoft Learning has stuck with the concept of ‘intermediate’ certifications.  With these two exams under my belt, I was now Microsoft 365 Certified: Modern Desktop Administrator.  This is what they are calling Associate certifications, which I suppose is about the same as the MCSA that I earned so many years ago.

Of course, I was far from done.  Once I had those two exams passed, which were essentially Windows 10 focused, I had to go on to the exams that were mostly focused on the cloud technologies.

MS-100: Microsoft 365 Identity and Services was almost (but not entirely) all based in the cloud.  Like it’s partner exam, you need to know all of the cloud services, but you also need to know on-premise features such as System Center Configuration Manager (Current Branch), as well as Active Directory, and even though they are not supported in Azure AD yet, you needed to know Group Policy, and when and how it would be used.

MS-101: Microsoft 365 Mobility and Security spent a lot of time focusing on managing devices and security from the cloud, as well as protecting a company’s data.  There was a bit of a focus on what devices were supported, including Apple iPhones and iPads, as well as Android devices.  You not only needed to know how to deploy them to the managed environment, you also need to know how to implement multi-factor authentication (MFA), conditional access, and how to segregate data on a BYOD device so that users who use the same device for both business and personal could not accidentally share sensitive corporate data.

While it took a lot of studying, I was very happy, after having passed this last exam, to receive an e-mail that read:

I have received many of these e-mails before… but this one had something that I had never received: three stars. 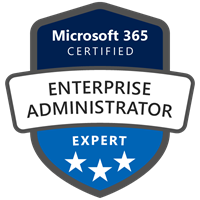 Yes, if you look at the modern Microsoft certifications, they progress from the Fundamentals level (one star) to the Associate level (two stars) to the Expert level (three stars).  thinking back on many of the other certification logos I have had, I have to admit, I like these.  Don’t get me wrong, the certification logos were once really snazzy, but over the years the logos went from:

…yeah, they spent a lot more on style in the old days, and I’m not going to lie… I may like the original MCSE logo, but the most recent iterations of them were somewhat lacking stylistically.  So the new ones, with the multi-coloured shield design is like fresh air breathed back into the program.

So at this point, I will probably take a bit of a break from the certification track.  I do not know what will be next, but I suppose the most likely candidate is going to be something Azure related… but it is not going to happen right away.  I have spent a lot of time studying and preparing for these exams, and my client has been very understanding.  Now is the time for me to get to work, putting what I learned studying for these certs to good use!