Are all phone protector cases created equal?  I have discovered over the years that, much to my dismay, they are not.  Some cases look pretty and are sleek, but they do not do a very good job of protecting your phone.  Others are big and bulky, and your phone is safe… but you never want to carry it.  I have been looking for a compromise that will look and feel good, but still provide comfort.

There are actually two components to the phone that need to be protected – the case itself, and the screen.  And so, in addition to the protective case, we should really be investing in a protective screen covering as well… and because our phones are touch devices, it has to be a balance between protective and functional.

Last month I bought my new Samsung Galaxy S8 Plus phone.  It is the first non-Apple device I have bought in a few years; it is also the first phone I bought second-hand, thus no extended coverage warranty.  It is a very sleek phone, and from the very beginning I bought a protective case, as well as an explosion-proof tempered glass film.  I was satisfied that with the combination of both, I would be protected… until I tried to put the phone with the screen-protector into the case, and realized that the case was so tight that the two would not work together.  And so, the $50 investment in the protective case was out the door… unless I wanted to leave my screen unprotected.

Over lunch that day I shared my concern with a colleague, who suggested I look into Urban Armour Gear (UAG) cases.  I checked out their website, and found the case I wanted – the Monarch Series case features 2X drop-protection, and comes with a ten year warranty.  It is handcrafted with top-grain leather, a polycarbonate shear plate, armour shell, allow metal hardware, and impact-resistant rubber.  All of that sounded good on paper… but would it allow me to protect the screen at the same time?  I checked their FAQs, and realized that UAG also sells tempered glass screen protectors.  It stood to reason that they would fit with their cases, right? 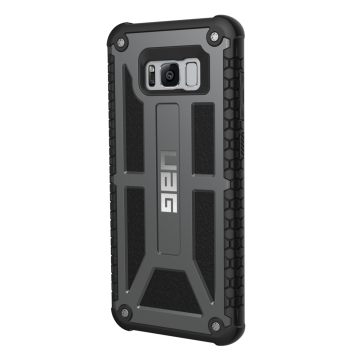 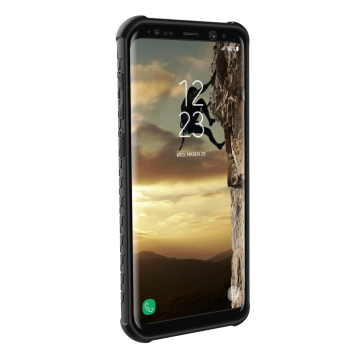 And so, I placed my order.  A week later I received my Monarch Series Galaxy S8+ case, and I will tell you this, it was money well spent.  Worth every penny!  As expected it fit my phone like a glove… including the tempered-glass screen protector.  Unlike some other protective cases, it did not feel like I was carrying a brick in my hand… the protection was offered with a strong consideration to the sleek design of the phone, and so while the case does make the phone bigger in my hand, it is only slightly bigger, and not at all uncomfortable.

…but does it work?

I have always tried to be as delicate as possible with my phones, and try to be as careful as possible.  I have seen friends walking around with cracked screens and worse, and I have never wanted any of that.  But sometimes you cannot be as careful as you like.  I was carrying more than I should have to my car – suitcase, laptop case, gym bag, and a hanging garment bag.  I was also on an important call, and stupidly had my phone secured between my shoulder and my ear as I rushed to make it out on time.  I almost made it… but at some point, something had to give.  In this particular case it was my garment bag, and when I lurched to try to save it…

…the phone flew from its perch and dropped… and bounced… and bounced again… until it fell flat, face-down, on a pile of stones.  It flew several feet – easily ten feet from where I was standing, and so it fell from a height of nearly six feet, and bounced another ten feet.  I was not holding out hope.  I put my bags down, picked up my phone, and…

…RESUMED MY PHONE CALL.  All that potential for damage, and my phone did not even drop the call.  The screen was safe because of the protective shield, the phone was protected thanks to the UAG case, and all was good in the world.

And so: we know that the case does a spectacular job of protecting my phone… but does it prevent any of the features?  Let’s run them down:

In other words… the UAG case allows complete functionality of the phone, combined with spectacular military-grade protection.

All in all, I would recommend this case to all of my friends and readers… and knowing that they make cases for all of my other devices as well (Surface Pro 4, iPhone 6S, iPad Mini), I will be looking into those UAG cases as well.  Now that their case has passed MY drop test, I am satisfied knowing that this is the case for me.