Let’s face it… Microsoft wants you to use Microsoft, so when it can, it creates technologies that make it easier for you to do so.  Automatic Virtual Machine Activation (AVMA) is one of those tools.

I remember when Microsoft got into the server virtualization game, it really had very little to compete with VMware, other than price.  That has certainly changed, and while Hyper-V is not completely where ESXi is, it is damned close… and there are some benefits, such as AVMA.

What is it?  Simple.  If your virtualization host is running Hyper-V, then your guest VMs do not need to activate to Microsoft… or even to a KMS Server for that matter.  They activate directly to the host.  That means that rather than having to keep track of (or worse, share) your Product Keys, you can simply share the AVMA keys.  The rest is done through the Data Exchange Integration Service in the Hyper-V stack.

The downside?  You have to have an (activated) Windows Server Datacenter Edition as your host.  In other words, it will not work with Hyper-V Server.  That is not a huge downside, but it is significant.

The keys are available for free on-line, and the activation is done against your host.  So use the following keys:

(Notice that this works only for Server 2012R2 and later.  The feature was only introduced in that version.)

One thing you need to make sure of in the guest VM settings… You need to have Data Exchange enabled in the Integration Services context, as seen here: 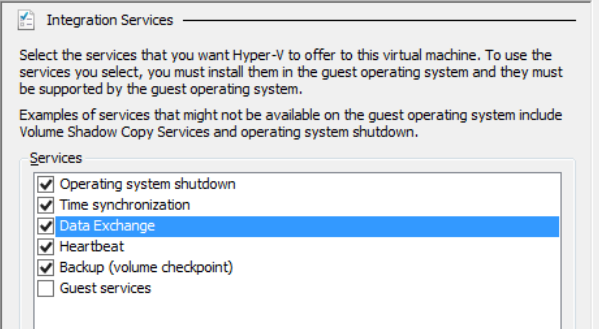 …So now, you can include the AVMA key in your VM templates, and you will be all set.  But if you didn’t do that, try the following command:

That will add the product key to your VM, and all that is left to do is activate it using the following:

That’s it… Have fun!