It is not so hard to believe that it has been a year since I bought my Microsoft Surface Pro.  I liked it, but as I am not an average computer user, it did not take too long for me to realize that it was simply not powerful enough to be my primary laptop.  Don’t get me wrong, it was a great companion device, and I used it as such for the past year.  It was great for e-mail, web surfing, and e-book reading.  I watched a ton of movies and TV shows on it, but that was really the extent of what I used it for.  The long and the short of it is that once it was relegated to the secondary role, I could have settled for the less expensive (and even less powerful) Microsoft Surface with Windows RT.  What’s done is done though.

Following the launch of the Surface Pro 2 I noticed that the specs were identical in most (and superior in some) aspects as my primary laptop.  I decided to give it a try… the last week of January I stopped into the Microsoft Store in Yorkdale Mall (Toronto) and picked one up.  Of course money being a factor, I decided to settle for the 4/128 base model (4GB RAM, 128GB SSD).  For $999 it was not as powerful as I wanted, but to try it out…

I spent precisely a week with it before I realized that if it was a little more powerful this could be my primary laptop.  I debated and debated… and then when I got a $50 gift card for the Microsoft Store I decided to bite the bullet… the store’s return policy is 14 days, so on Day 11 I went back… only to find out that they were completely out of stock.  However, they told me, the new Square One location had plenty in stock.  I hopped into my car and zoomed down there.  Yay, they had it!

One of the things I really appreciate about dealing with the Microsoft Store is that whether I have my receipt or not they can look up my past purchases by e-mail address.  They found my most recent transaction, and within a few minutes they exchange was done.

When I started using the original Surface Pro last year I was worried that 128GB of storage would drain pretty quickly, so I also bought a 64GB Micro-SD card, and through the magic of Windows 8 I configured most of my profile (documents, pictures, videos, downloads, desktop) to redirect automatically onto that chip, which I left inserted permanently (See article).  While I never came close to my 128GB storage limit on the device, this strategy made migrating my data the simplest of operations… I took the Micro-SD card out of the old machine, inserted it into the new, and redirected the appropriate folders.  Done.  Between that and SkyDrive, I am loving Windows 8.1 more and more every day!

With zero exceptions, the only thing that is slightly less comfortable on the Surface Pro 2 (in comparison to my Lenovo Carbon X1) is the keyboard.  I still like a full sized keyboard, and that is lacking when I am on the road.  However the Surface 2 Type Keyboard (now backlit!) is great in almost every respect… I am just not a fan of the mouse pad, but as I almost always use an external mouse (and touch screen and stylus) it is really mostly irrelevant.  I still would not have cared for the touch keyboard, but the tactile ‘I can feel the keys when I type’ keyboard is great – I am a fast if not great typist, and I do not find myself making any more or fewer typing mistakes on this keyboard than I do on the laptop.

That, of course, is the $64 question.  The simple answer is that I don’t know yet… I have not run the battery down.  However the 128GB model that I replaced with this one charged overnight Friday, and I used it for demos all day Saturday at the Microsoft Store… it wasn’t until midday Sunday that I needed to plug it in.  As for this model, I charged it overnight Tuesday, and will not plug it in again until the battery dies.  I will report back the results.  However remember again, this is the only device I am using this week, and I already have a couple of virtual machines running so while results may vary, I assume I will be on the lower end of expectations.

One thing I was told with regard to the battery life is that the firmware update (available from Microsoft Updates) greatly improves the battery life… I applied the update yesterday, so it shouldn’t adversely affect me.

Because I am no longer ‘with’ Microsoft, I don’t really want to join the Surface Pro to a domain.  No problem, I have a subscription to Windows Intune, and I simply installed the agent and poof… I can manage it, and aside from that (and patch management) the Windows Intune Endpoint Protection (WIEP) began protecting the computer right away.  For my money there isn’t a better product on the market for what it does. 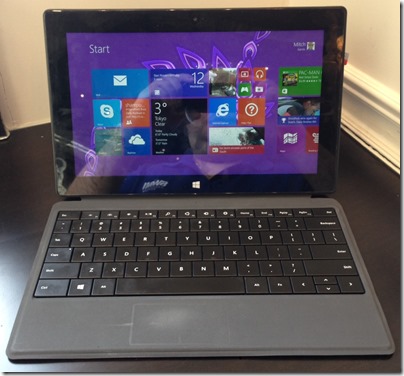 I got a call this week from an old friend asking if his customer would be able to install his own software on the Surface Pro.  In fact, the Surface Pro is a complete Windows 8.1 machine with no exceptions or limitations.  It runs Windows 8.1 Pro (although that can be replaced with Windows 8.1 Enterprise for corporate users).  It has a kick-ass Sandy Bridge CPU, and as I said… it does everything that my Lenovo does.  In fact, when I travel I can leave the Lenovo at home and just take its port replicator/docking station, because with the USB 3.0 port on the Surface Pro 2 that is all I need to transform it into a multi-screen workstation with all of the desktop peripherals in my hotel room.

Now with that being said, I just bought a Surface dock on ebay.com (they seem to be impossible to find otherwise) and am really looking forward to it… the device sits seamlessly in, and I can take it with me to my hotel whether that be in Japan or wherever… and just take the device when I go to the office or to a client (or a café or an airport).

As I look at the Surface Pro 2 (and not how it compares to the Surface 2) I have to smile… it is a fully functional computer that weighs in at just under 2lbs.  The power supply uses the same connector as the stylus so you can either charge it or connect the pen, but that is a minor issue.  The fact that the power supply has a USB port to charge devices rocks by the way.

The ports – Mini-DV for whatever video I need, Micro-SD slot (discussed earlier), USB 3.0 port, and audio jack are fine for when I am on the go, and the ability to plug in any external USB  3 docking station or port replicator means that when I am at home (or semi-permanent space) I can plug in as many external devices as I want, especially my dual 21” monitors in my home office.

The keyboard is great compared to everything else in its class, but when I am docked I will still have an external keyboard and mouse – I have an abundance of those anyways.  However I like having the options.

What do I think?  I think that what you spend versus what you get the Surface Pro is the best deal in town.  There are other great fully-functional tablets on the market, but this one has and does everything I need, and the price is right.

Oh by the way… there has been a lot of discussion about the addition of a second position of the kick-stand.  I cannot begin to tell you how much I do not care about that – Maybe at some point I will use it, but for now every time I have flipped it down I tried it for ten seconds and decided that no, I prefer the original.  However I am sure that some people will like it… it’s just not for me; it neither appeals to me nor bothers me.

Thanks Microsoft, for coming up with a device for me.

Now if you will excuse me, I have to go do something in Hyper-V.  What, you ask?  Anything I want… the Surface Pro 2 supports it!